Korčula is a historic fortified town on the protected east coast of the island of Korčula. The old town is surrounded by walls, and the streets are arranged in a herringbone pattern allowing free circulation of air but protecting against strong winds.
The old town of Korčula is one of the best examples of a fortified medieval town in the Mediterranean and is listed in UNESCO’s tentative list of outstanding world heritage sites.
The town's main historic sites include the central Gothic and Renaissance Cathedral of St Mark, the Town Hall and the massive town fortifications.
The world's greatest 13th century traveller, Marco Polo, who was a native of Korčula, opened the door of the Far East to Europe.

The town museum is located in Gabrielis Palace, which is an outstanding example of 15th and 16th c. residential architecture in the centre of the old town.
The exhibits evoke the cultural and commercial milestones of Korčula from prehistory to the present. The collections explain traditional crafts; in particular, stonemasonry and shipbuilding which were of essential importance to Korcula. Among the most valuable exhibits are the bronze pendant of Tiziano Aspetti and an 1819 piano played by Beethoven's close friend, Edith Streicher.
Household objects help to explain everyday life. The old kitchen in the attic makes for a memorable experience.

Korčula's developing urban identity is exemplified by a number of exhibits: a facsimile of a page from the Statute of the Town and the Island Korčula from 1214, artistic imagery of the town, the town standard, stamps, stone inscriptions, documents and coats of arms.

St. Mark's Cathedral is the most attractive Gothic and Renaissance building in the old town of Korčula. It was built by local stonemasons in the 14th, 15th and 16th c. with the support of Italian masters. The most famous local stonemason was Marko Andrijić whose masterpieces are in the upper part of the bell-tower and the ciborium above the high altar in the central nave, dedicated to St. Mark, the patron saint of Korčula.
The Gothic and Romanesque main portal was built by the Italian master, Bonino da Milano.
The southern lateral nave is dedicated to St. James, while the northern one is to St. John, with the adjacent St. Rocco chapel.

It is believed that the greatest traveller and explorer of all time, Marco Polo, was born in Korčula in 1254.
On 07th September 1298, the great naval battle between the Genoese and the Venetian armadas took place in front of the town of Korčula.
The Venetians were defeated and the Genoese imprisoned, among whom was Marco Polo, who was freed on payment of a large ransom in 1299.
In a Genoese prison, Marco Polo dictated his experiences about his journey to China to Rustichelli. These journeys are described in the book “Il Milione”. Marko Polo died in Venice in 1324. 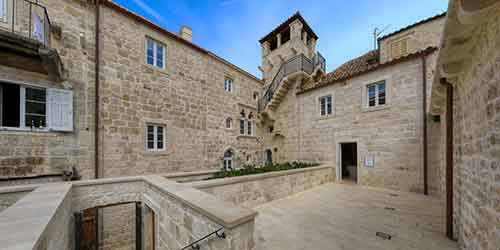 Marco Polo tower Korčula
The family house of the Polos in Korčula has been preserved and the Depolo family remains the oldest Korčulan family.

Next to St. Mark’s Cathedral, there is a former bishop's court where the Abbey Treasury is now housed, established by Abbot Ivo Matijaca and the Croatian painter Ljubo Babić in 1954. The earlier bishop's court from the 14th and 15th centuries was reconstructed between 1860 and 1874.
In this famous museum of religious art, there are many invaluable works by Venetian and Croatian artists.
The most significant work is the polyptych "Our Lady With Child and Saints" from 1431 by the Dalmatian painter Blaž Jurjev Trogiranin (? -1450), the most significant name in Dalmatian Gothic art. He resided in Korčula from 1431 until 1435 creating paintings for Korčula churches and teaching drawing and painting. In the wall cabinets, there are numerous documents and books which speak about Korčula’s and Croatia’s distant past. 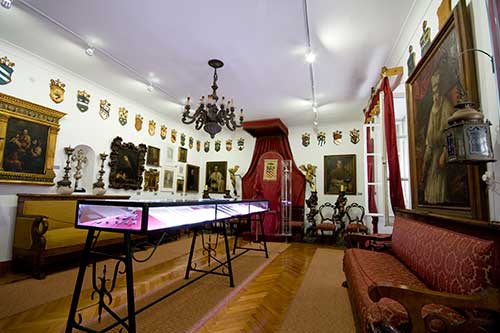 The most notable is the Korčula Codex from 1214. The splendid Gothic two-part window "bifora" is turned towards the interior of the hall in order for the visitor to enjoy the style and technique. Coins minted for Korkyra Melaina from the 4th century B.C. are in the numismatic collection cabinet and are of special interest.

The Church (and Brotherhood) of All Saints was built at the beginning of the 15th century in place of an older church (10th c/13th c.) The oldest Korčula brotherhood of All Saints or the Brotherhood of Good Death was founded there in 1301.
Icons from the Greek island of Crete are exhibited in the Icon Collection. Korčula galleys took part in the war between Venice and the Turks for the island of Crete (Candia wars). The war ended with the defeat of Venice and the general evacuation of the Venetian garrison, administration and priests from the island.

These valuable icons were brought to Korčula by the returning galleys.

The Revelin Tower from 1485 protects the area between the Arsenal and the Land Gate Tower.
The Arsenal of 1572 was built at a time when the importance of Korčula for the Venetian Republic was growing. In the 18th century, Venice wintered its fleet in Korčula.
Above the entrance to the Land Gate, there are two symbols marking Korčula's history: a bas-relief with the winged lion of St. Mark, a symbol of the reign of the Venetian Republic and a stone tablet commemorating the 1000th anniversary of the coronation of the first Croatian king, Tomislav. 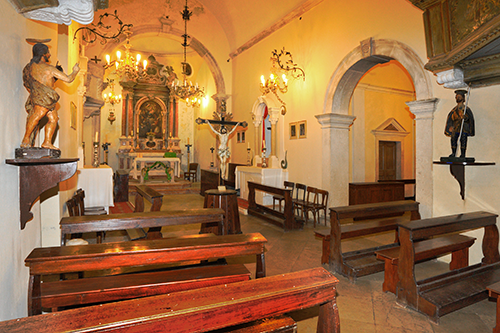 This little church is located opposite the St Mark’s Cathedral. The church was built in 1483, celebrating the Immaculate Conception of the Virgin Mary.
The local noble families Gabrielis and Ismaelis used it as a private chapel.
Gravestones decorated with coats of arms from several medieval Korcula families are set in the floor.
It is believed that the tomb of the priest Antun Rozanovic, who led the defence of Korčula from an Ottoman assault in 1571 is also in this church. Resplendent mosaics behind the altar were created by the Dutch artist Louis Schrikkela from 1964-67.

Today the church is being used as an occasional art gallery displaying works of local and international artists.

This humble little Gothic church, located next to the Cathedral dates back to 14th century. It is said to be one of the oldest churches in the Old Town.
The interior of the Church is rather plain, but there are 12 wooden statues of apostles, placed along the wall. St. Peter's statue is on the altar. These wooden pieces were created by the Venetian artist Francesco Terilli. The floor contains gravestones. 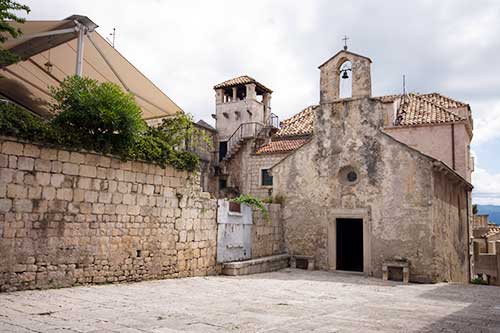 St. Anthony’s is half an hour's walk from the centre of Korčula, towards Lumbarda. As well as of religious interest, it is a protected area of natural beauty.
There are 102 steps to the top, bordered by a cypress alley planted in 1708. The summit is crowned by a small 14th c. church dedicated to St. Anthony the Abbot.
During Bishop Španić's time, at the end of the 17th c., the church was renovated and was dedicated to St. Anthony of Padova. On the wall of the small neighbouring house, there are reliefs of St. Anthony who is celebrated on 13th June. 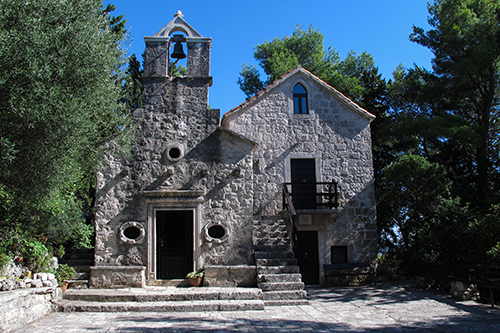 The hilltop affords a beautiful view of the Korčulan archipelago.

MAXIMILIAN VANKA (1889-1963) Croatian painter - celebrated as the finest Croatian portraitist in the 1920's and 1930's.
The collection of Maksimilijan Vanka, along with his house and studio in Korčula, were donated to the Academy of Science and Arts in 1964 by his widow, Margaret Stettin Vanka.
The villa contains the Memorial Collection and was opened to the public in 1969. Vanka is an important name in modern Croatian art. He was a corresponding member of the Academy of Sciences and Arts and a professor at the Academy of Fine Arts in Zagreb, until his departure to the United States in 1934.
The collection of Maksimilijan Vanka in Korčula presents a cross-section of his work from the 1920s.

It consists of dozens of paintings, watercolours, pastels and drawings, showing Vanka's art from the Monumentalism of New Reality, through the influence of Van Gogh and Expressionism, to later constructivist tendencies.

The exhibition "KORČULA WOODEN SHIPBUILDING" by Dušan Kalogjera, also the author of the book "Korčula shipbuilding" (winner of the J. J. Strossmayer-HAZU award) and book "Korčula sailing ships in the 19th century" and the director of the Korčula Culture Center, Lana Filippi Brkić was opened on July 23, 2022 in Korčula's Loggia, a new gallery of the Town of Korčula. The exhibition shows a section of Korčula's wooden shipbuilding through history and it is divided into several areas: the history of shipbuilding from the 13th century, shipyards, sailing ships, types of ships, boat figures, shipbuilders, motorboats, tools and documents.
All texts are at the same time also translated into English. 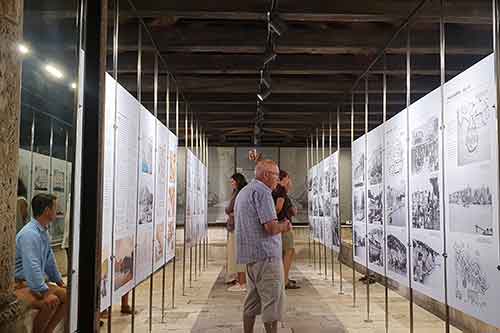 Collaborators at the exhibition were members of the Association "Korčula wooden shipbuilding" and Marija Hajdić, director of the City Museum of Korčula.
The exhibition will remain open until the end of the year, and will be open for viewing during July and August every day from 9 a.m. to 1 p.m. and from 6 p.m. to 10 p.m.
For groups min. 5 people from September the 2nd 2022 - advanced announcement required: +20 716 529
Text and photo: Lana Filippi Brkić

The Town Library is a cultural and informational centre of Town of Korčula offering access to knowledge, information and cultural content. 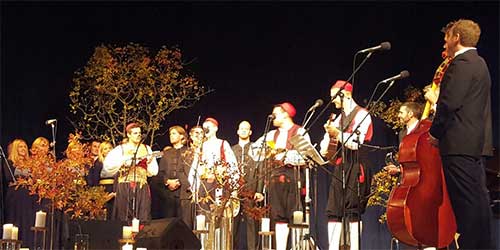